From October 5 to October 17, 2007 we toured Peru. The high points of the trip are illustrated in the following pictures. This trip was organized by General Tours with a group of 10 people. The pictures are arranged in the chronological order of the tour. A local guide was provided for all of the tour. The guide was outstanding as she knew the country, the history, and she made allowance for our comfort.

We flew from LA to Lima, an overcast coastal city of 7 million. We had an excellent view of the Pacific Ocean from this shopping mall near our hotel.

There are many modern structures in the newer parts of Lima. Traffic in the narrow streets is chaotic with hundred of small Daewoo taxies tooting horns.

Seldom used shortcut from the shopping mart down to the ocean. 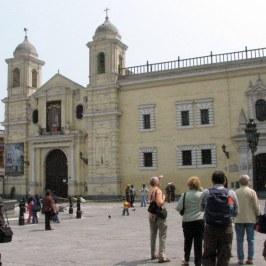 Plaza Bolivar is surrounded by old Spanish structures. Some date back to the 1500s. We visited the Inquisition Museum. 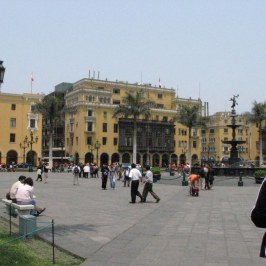 The horses on parade are perfectly in step. 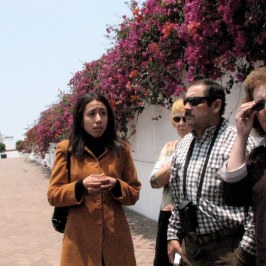 Our guide explains the history of Lima.

Just on corridor in a large building of artifacts.

At Awanacancha, a breeding center for South American camels, we learned about llamas, alpacas, and vicunas. 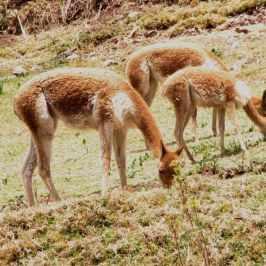 Vicunas are actually a rare animal normally found in the wild. The wool is extremely fine, soft, and expensive.

Llamas are seen on many farms and roaming wild. 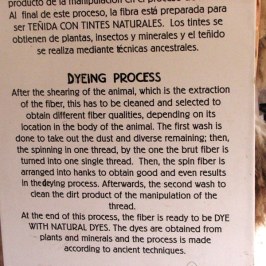 The explanatory sign has trouble with the word dye. 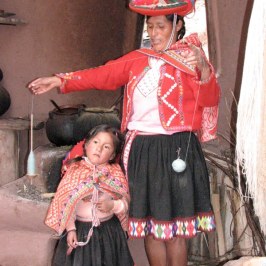 An opportunity to shop is coming.

Our first look at the Sacred Valley. It was sacred to the Incas because the fertile soil was the lifeblood of their survival. The large valley is fed by the Urabamba River which flows east to the Amazon.

Evan, an excellent driver, with our tour bus. With ten people we always had a couple empty seats.

Small 3-wheel Hondas are used as taxis in the small villages.

At the Pisac market we were greeted by colorful girls hoping to get a tip for posing.

Janet posing with a young girl and small lamb.

Our hotel in Urabamba. Most of the hotels were OK. The food was good and occasionally excellent.

The fortress of Ollantaytambo is the first Inca ruin we visited. Climbing the hundreds of rough rock stairs looked intimidating but that is why we came to Peru. 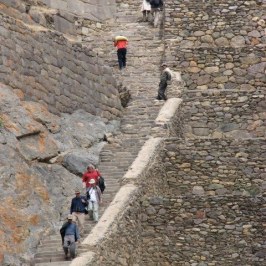 A closer view of the stairs and the rock retaining walls that form terraces for farming. The walls are carefully engineered, extending deep into the ground with allowance for drainage.

There were numerous visitors, but lots of room.

Looking back down to town with mountains in the background. We are at around 9000 feet elevation.

The Incas did a marvelous job of fitting large stones accurately. These stones approaching 1000 pounds are shaped so accurately that one cannot put a piece of paper between them.

Looking down at some terraces shows the steep topography. There is very little rain but the Incas channeled irrigation water from distant streams. Corn and potatoes were staples.

We stopped for a sample of Chicha, a low alcohol Peruvian beer made from corn. 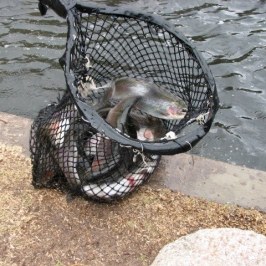 At the local fish farm they grow rainbow trout up to two pound size.

A large pottery manufacturing operation captures many of the old Inca designs. It would have been nice to purchase pots but transportation is a problem.

Distant mountain peaks show snow and glaciers. There are around 30 peaks higher than 20,000 feet. 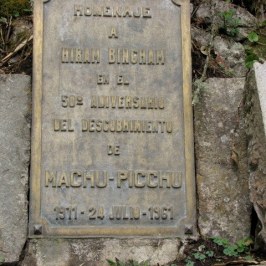 The plaque honors Hiram Bingham who “discovered” Machu Picchu in 1911. 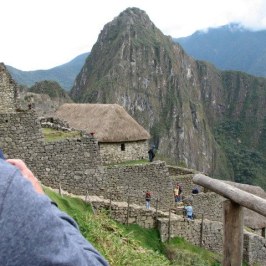 We were in constant awe of the extensive construction. Most of the work was done in the 1400s. After the Spanish arrived in the 1500s the Inca civilization was doomed.

There were times when the trail was crowded, but his is a large place.

Looking down we get some idea of size and the numerous terraces.

Dick with Huayna Picchu in the background.

We greatly enjoyed our guide Maluska.

The telephoto shot of the top of Huayna Picchu shows numerous climbers.

The full picture of Huayna Picchu shows how steep it really is. 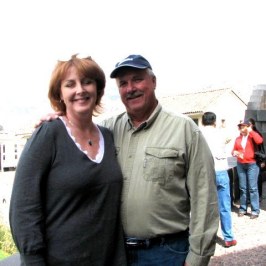 Paul and nancy climbed Huayna Piccha, and he proposed at the top. Our romantic note on the trip.

This structure is felt to be an observatory.

Many people brought a picnic lunch and spent the day. Note the active archeological dig. 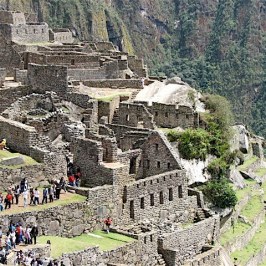 Massive boulders are used in places.

The precision fitted stonework was used for royalty or ceremonial structures. 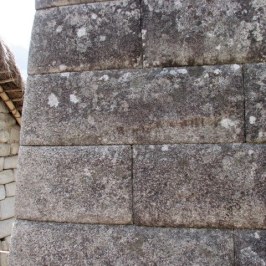 In the background we see stonework felt to belong to the home of a common worker.

The houses pointed North-South so that the sun could be felt all day.

Most of these walls are felt to be only retaining walls as they are too narrow for productive farming.

A carefully shaped stone is called the compass stone. Indeed it aligns exactly with the magnetic compass.

Our group is on the path down. It is a warm day, and we have been moving for hours. 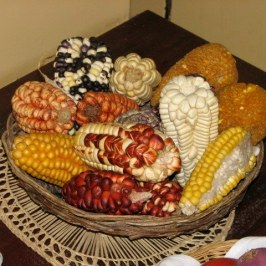 Peru is proud of the many varieties of corn grown here.

There are numerous wild flowers (but this is probably planted).

We saw many Bird of Paradise on the roadside. Even though we were above 8000 foot altitude the climate is strongly influenced by the Amazon basin. 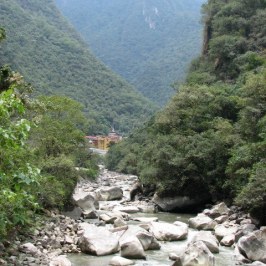 View of the Urabamba River with the town of Aguas Calientes in the background. 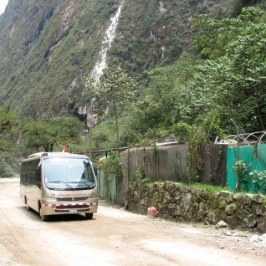 There are a fleet of Mercedes Buses to transport people from Aguas Calientes up to Machu Picchu.

Mimi and Jose show the exhaustion many of us felt after a day of climbing Machu Picchu. 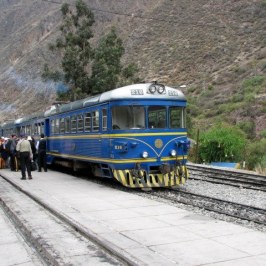 There is no road to Aguas Calientes (the base of Machu Picchu) so we ride a train for 1.5 hours.

Back on our bus headed toward Cuzco, we stopped at Chincheros to see a weaving demonstration.

The 700,000 population city of Cuzco is nestled in a valley with narrow roads and jumbled houses.

The Inca fortress of Sacsayhuaman is another example of precision building. Note the window repeated in three sequential walls. 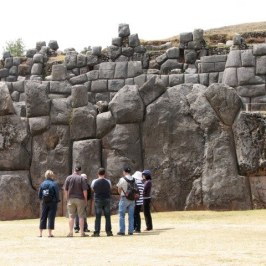 Some boulders are enormous and the Inca found methods to shape, move, and lift them.

We were treated to a condor sitting on a rock. He as not tethered. He later flew off.

Another view of Cuzco.

A temple from the early 17th century. 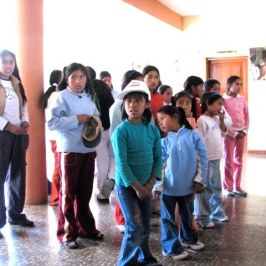 At a visit to an orphanage the young girls sang to us. 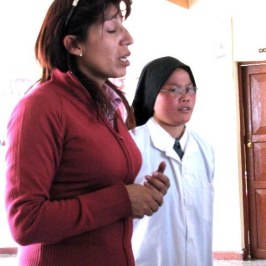 Our guide Maluska with one of the four young nuns who run the orphanage.

We visited the Inca ruins at Tipon. 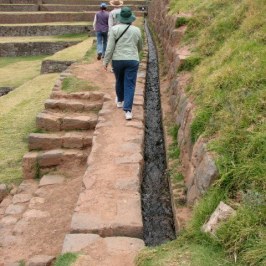 The irrigation system is extensive with active water distribution restored. The water passes through Inca channels from glacier runoff 20 km away. 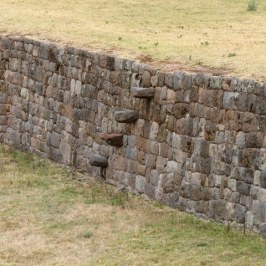 Novel stairs are built into the walls of the terraces. The large steps are difficult to climb.

The unique four-spout fountain appears to be a decorative feature.

We stopped at a roadside kitchen to watch the baking of cuy.

Almost everyone sampled the cuy (Guinea pig). It had a mild flavor, but it was greasy. 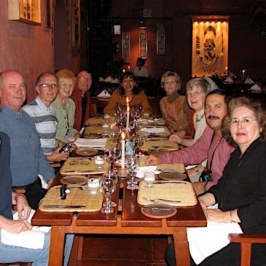 Our travel group at the last dinner.

Dancers entertaining at the last dinner.

It was a great trip!